I made these reservations nine months ago, right around election time. I had all the hopes of winning: the perfect candidate, the perfect road trip, the vacation of our dreams…

On a budget, of course. The Generation X, Millennial, Hillary-LOST budget. The hopes-of-next-summer-in-Spain budget. The “Why are you taking a trip this year instead of saving for next year?” Budget.

That is probably why I picked that motel in Yakima that was literally just a few dollars more than camping in Washington State Parks (I mean, seriously? $45 a night for campgrounds that have neither electricity nor showers?). The one in the questionable neighborhood, with PWT tenants, people screaming all night (“Puta Madre!!”) and a room that smelled like a combination between bleach cleaner and piss?

That is probably why I picked the “hostel” in the Olympic Peninsula. $10 per person per night? An old eccentric man who literally opened two bedrooms of his small ranch and provided my family with chores of wheeling a fallen alder out of the woods?

That is probably why I found a cute little Seattle bungalow on Airbnb that apparently did NOT have a laundry room after two nights of camping and forced me to wash three loads of five people’s laundry in the all-too-fancy remodeled sink, hanging them on the beautiful cedar deck to dry overnight.

That is probably why I found a campsite in early June when my Columbia River Gorge hostel called to tell me they’d sold the property and canceled my reservation … A campsite still available to reserve in June for a July entry should come with a giant red flag: “Nestled between Interstate 84 and a train track with a railroad crossing, the trucks and honking trains will surely keep you awake in all the dark hours of the night when you thought sleep would give you peace.”

So here I am. Nestled along a river whose wind blows east while the current moves west. Waiting for the moment when we need to leave to drive an hour and a half to the capital of Oregon to stay, god forbid, in a hotel that has a room full of washers and dryers. To wish, nine months later, that I had foresight for the lack of washers and dryers, for the constant disappointment of a lost candidate, a dream vacation, of the realities of a road trip.

Just take a look at that view. 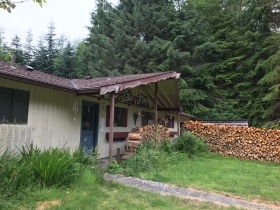 With low skies and an eternal longing, we drive along twenty switchbacks to the top of the mountain. We pass two cyclists whose pathway has not been blocked by road construction. It is our last morning here, though I could stay forever.

At the top of the mountain on day three, the clouds hover over the sound and threaten rain that will not make an entrance. By mid afternoon we will be bottlenecked in Seattle traffic, the clouds will clear, and our only view will be of the Space Needle from I-5’s perspective.

But for now, I soak up five minutes of LTE to finish up some work and argue with adults about what constitutes a substantive post; I take a picture for tourists who can see the island they were on yesterday and want it for their Christmas card; I take a picture of my family, sans me, with the gray skies and San Juans a perfect background for anyone wanting a perfect background.

We are trapped here, in these low skies and this photo, for an eternal moment of perfection, of cool Washington air and windless peace; of nature and man (with the stone tower built by the CCC to give us the best view), of the climb that I was denied and that my Pilot conquered easily; of the love for all that is beautiful on this earth. 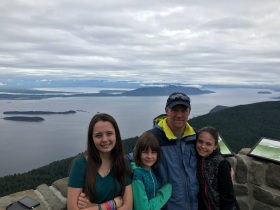 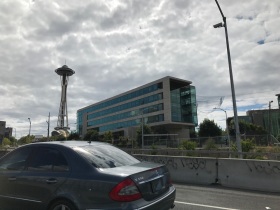