My fortieth April comes to an end with pink flowers and red shirts. Both images are equally beautiful and painful–fuchsia tinted with the blood, sweat, and tears we put on the line every day for a society that vilifies us and threatens us with jail time for shutting down schools for a singular day–when that same society has worked to shut down schools for decades. 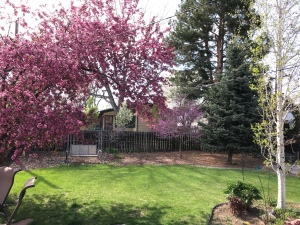 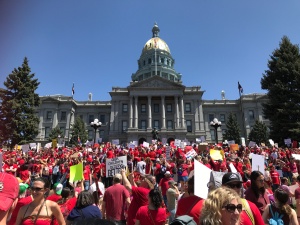 My fortieth April is these nachos–too damn big to consume, too impossible to say no to–because sometimes life just feels like a challenge we must at least attempt to make a mockery of. 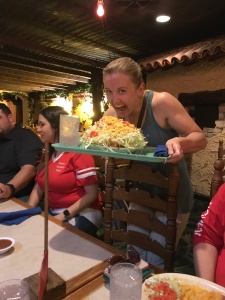 My fortieth April means my parents are in Paris, on their way to only four months in Europe because I begged them not to totally leave me, sell the house, and disappear from our lives when I’ve just lost my father-in-law and every remnant of parenthood on my husband’s side of the family. 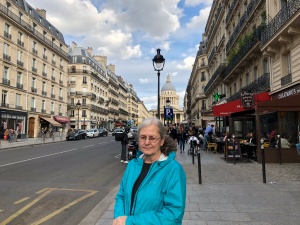 My fortieth April brings the beginning of the end of my children’s childhoods–no more towing them in the bike trailer, no more feeding them from rubber spoons, no more shuttling them to elementary school–instead, the hard reality that they will ride their own paths, make their own decisions, and quite often, leave me behind. 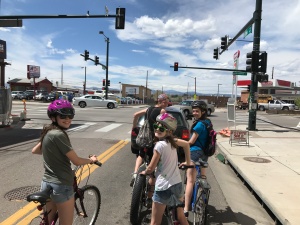 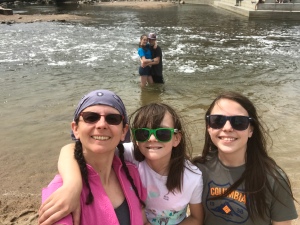 My fortieth April means half of my life has been in the warmth of this man’s arms, this man who flew alone to Tennessee to bury his father while I made a mockery of life with nachos, this man who has never done a thing but work to please the people in his life, who speaks so little but whose actions speak volumes… volumes of loving and giving. 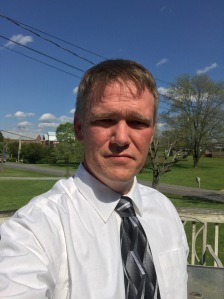 My fortieth April has been hell. Our school district has desks twenty years old and teacher salaries to match. My husband is in a union job that will likely screw him out of one because of seniority. My oldest daughter’s first words to me on my fortieth birthday were, “Can I have my phone back?” My beloved father-in-law died. My parents boarded a plane. My school district’s open enrollment healthcare plan is $1000 a month with a $3500 deductible and $12,700 out-of-pocket maximum. We have bought and paid for six weeks in Iberia and are beginning to wonder why.

My fortieth April is these blue skies. These smiling faces. This willingness to stand up to the truth behind teachers’ vilification. These parents eating French fries in France. This beautiful set of girls we have somehow managed to raise, healthy and unscathed. This fuchsia bleeding into red shirts at Casa Bonita, making a mockery of all that is pain, all that is life. 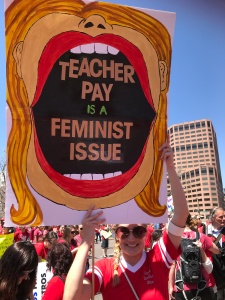 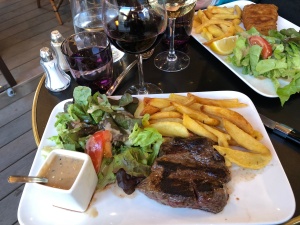 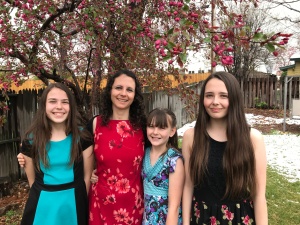 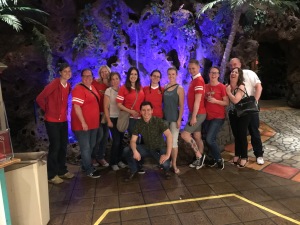 My fortieth April comes to an end with pink flowers and red shirts. Because we’re all a little bruised after forty years on this Earth. Because the blood, sweat, and tears that go into living this life are as beautiful as the laughter, mockery, and joy.

My fortieth April is the middle of spring. And just like all the other springs that have made up my life, it is time to spring forward, time to smile, time to move on.

Because it’s April–it snows and burns a crisp on our necks within the same week–and we must learn that even the red scars of sunburn will eventually fade into the soft petals of fuchsia.