I was eight when the plastic surgeons took their scalpels and shaved a thin layer of rectangular skin from my upper right thigh to carefully morph it onto my shoulder and, twenty stitches and forty-seven staples later, make me a new scar over my burn scar.

For the remaining years of my youth, every time I wore a swimsuit, a tank top, an open-necked dress, I had to answer questions. “What happened?” “How old were you?” “What were you doing?” “How much did it hurt?”

Even though I know my mother worried that the questions would always lead to blaming  her, no one ever asked me, “Where were your parents?”

Obviously, they had done the best that they could. After a few moments of shock when the six cups of water came tumbling down onto my ballerina-shoe sweatshirt, they ripped off the thick cotton and lifted me towards the sink, flushing me with cold water. They called the neighbor who was an EMT. They placed me in an ice-cold bath to try to soothe the bubbling blisters. They drove me to the hospital, to doctor appointment after doctor appointment for six months. They scheduled the surgery. My mother took off work for two weeks to care for me in and out of the hospital–her only vacation time of the year spent fretting over the major surgery her eight-year-old child had to undergo. The extra three days in the hospital because I just wouldn’t heal. The forty-five minutes I screamed after the surgery because the hospital was undergoing a major renovation and no one could find me a nurse to administer pain meds.

Primarily on my shoulder, but truly spilling beyond their surgical tools till all the way below my belly button, I was scarred for life.

Its bitter reminder stung me on my wedding day when I knew I could only pick a dress that would fully cover my shoulder.

On each of my children’s birthdays, when their anxious, hungry lips opened up a new wound in my left nipple that wouldn’t heal for six weeks of excruciating, needle-through-the-veins pain each time they nursed.

On every cock-eyed look I’d received throughout my life when people noticed the scar more than they noticed me.

I was eight years old when I had the best birthday of my life. My parents spoiled me that year because the surgery would prevent me from swimming in any of the five Finger Lakes for an entire summer, a punishment equal to hell for an upstate-New York kid. They let me have not one (the usual), but three friends spend the night. I got a Smurf watch and two Slinkys and a bouncy Gummi Bears toy that we played with for hours. My mom made a strawberry cake with strawberry frosting because I was obsessed with pink. They borrowed the neighbor’s VCR and let us stay up late watching movies. They made my night magical.

When my fiancé proposed to me more than ten years later, there was only one date I had in mind for my wedding day: 8.8.98. The number reflected everything–twenty years old, infinity, the life-changing events of my eighth year of life.

And though my mother always fretted over my scar, and though I feared making the choice I made yesterday for my entire adult life because of my fear of never healing and that cursed scar, I have no regrets.

Scarred for life. Just like I always have been and always will be. 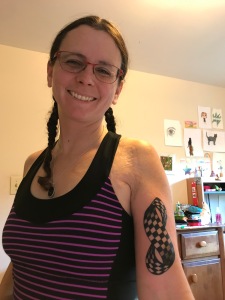 2 thoughts on “Scarred for Life”