As a high school English teacher, I have heard hundreds of stories, and I’m not just talking about the melodramatic novels, plays, and memoirs we are sometimes forced to share with our students.

The burden of our students’ stories is something that all teachers must carry when we enter this profession. We must balance this burden in the midst of administering tests during most of our planning days for a month, attending staff meetings where we are told that we don’t deal with student trauma well enough right after attending staff meetings where we are told we’re not pushing them towards the test fast enough, right after being in class with students who are off-the-walls doing handstands (literally) or thinking about suicide (literally), right before being in class with students who don’t speak a word of English and all my paras are–you guessed it–testing, and these new Arabic-only students have come here with hearing impairments, broken hearing aids, and no money.

I have tried to balance this constant bombardment of burdens with my other role, my most important role in this life: being a mother to three daughters who will soon fully enter the male-dominated maelstrom we call a society.

Most days I feel I fail at both. Some days I drown the sorrow with wine. Other days all I can feel is the freezing fresh air of a ski slope and a million tears of joy. Every day I feel the comfort and strength of the man I love, one who doesn’t contribute to the maelstrom.

Today is definitely one of the darker days. One of the days when I know that I have brought more of a burden than the average teacher onto myself by taking in this beautiful, kind, brokenhearted boy, who, amidst a series of relatively good news in recent weeks, had to share his whole sordid life story with the immigration lawyer today, had to explain the scars on his wrist, his thumb, his forehead, and the weight of his mother’s words behind those scars, had to hear that seeking asylum is an unwinnable case (never mind that just before the meeting he showed me a video exposing his hometown as the most dangerous city in the world to live, overrun by gangs) and that it will be two years if he’s lucky, three if it all goes well, and a 20% chance of never, that he will get. A. Work. Permit.

Not a Green Card. Not a driver’s license. Not an invitation to take a citizenship test.

Then to drive this teary-eyed, always-singing boy home for him to play his Spanish love songs all night long, to pluck along with his new guitar (a gift from my father, another man who doesn’t contribute to the maelstrom), for him to happily heat up some of the sandwiches he collected from the food bank to fill his unfillable teenage-boy stomach.

Then to have my middle child walk into the kitchen after her babysitting job and burst into tears.

Because they told her, after three weeks and mostly taking over the job from her baby sister (who solicited it to begin with) while Rio has play rehearsal, that they no longer wanted Rio to do it because she’s better.

Because she and I, this middle Mythili, haven’t been getting along lately because she’s fifteen and hates her mother, because she’s been calling me out for being too loud, too embarrassing, too forward, too judgmental, too ME, and because in this moment of inconsolable tears over thinking about what to say to Rio, Mythili and I are on the same painful page.

Because Riona has been hearing her whole life that she’s… too quiet. Too afraid to try new things. Too low to be in the regular group but too high to qualify for services. Too old to learn how to walk. Too immature to fit in with her sisters. Too messy.

Because Riona, after two hours of play rehearsal after eight hours of school after walking to and from school after doing her chores, made this iconic picture of her favorite things: the TV show Friends, an artist’s brush, a sunset background, and six–not five–cats, each with a symbol inside representing the members of our family: a pot for our papa chef, a heart for her mama, a music note for our five-weeks-in singing son, a star for our oldest dancer/actor/gymnast Izzy, a pencil for her artistic Mythili, and a paint palette for herself, the aspiring art teacher. 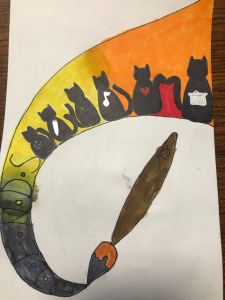 This is just one day, one story. One of the hundreds of stories that will make their way in and out of this heart within this cat, this heart between Bruce and me.