A few years ago, in search of something smaller to carry on road trips, I went to my typical “fashion” store, the Goodwill, and came across a perfectly small, just-big-enough-for-a-phone-and-some-gum, Polo Ralph Lauren purse. For $2. I popped it into my cart with my typical Goodwill assortment of work blouses and pants, and have been using it ever since. It fits perfectly into the console of my Pilot, can easily be crammed inside a carryon bag to bring onboard for a weekend getaway, and is light on my shoulder. It is the first, and last, “designer” purse I will ever own, and it is nothing special. It’s made from variations of polyester inside and out, though it has a reliable zipper. Compared to other, cheaper purses I’ve had over the years, I wouldn’t put my money on designer brands.

I suppose this purse, in retrospect, has now cost me 105 euros and two nights with very little sleep.

Because it was the purse, my Polo Ralph Lauren purse, that caught the eye of a petty thief as it sat blatantly (blatantly empty, I might add), on the passenger seat of our rental car while we carried seventy pounds of luggage into our latest Spanish apartment in Huelva.

Everyone has told me this. Passersby watching my two younger daughters scramble to lay on layers of packaging tape over the small triangle of broken glass at 20:30 on a Saturday night when we were supposed to go to dinner (it turns out dinner in Spain is an hour later anyway, so by the time we arrived in the restaurant at 21:00, we actually beat the long line of hungry customers that would soon make its way down the parkway). “¿Que pasó? ¿Ocurrió aquí? ¿Que tuviste adentro?¨ I heard the same questions when I texted Andrea, the Airbnb caretaker who assured me that this area is ¨muy tranquilo¨and nothing like this has ever happened before, and what did I have inside the car to grab a thief´s attention?

Where did we get the packaging tape at 20:15 on a Saturday night? A small detail of my travels in Spain: having lived here for a year has helped me tremendously with tiny bits of knowledge that are crucially important for moments like this—bazars, or more commonly called chinos—are Chinese-run everything stores that are even open on Sundays when the entirety of Huelva is camped out on the five-mile beach.

I speak enough Spanish to text the owner of the apartment later and tell him the pilot light is out on the natural gas water heater, but even after he texts me photo-supported directions, I can’t seem to light the flame. He calls and coaches me through in such rapid-fire Castellano that I become flustered and am unable to explain what I have done wrong, so, alas, Andrea saves the day for me once again, walks over and lights the flame within seconds.

I speak enough Spanish to understand that on Sunday, everything is closed, and the only thing we can put our money towards are some tapas y postres, not window glass. Mythili and I make our way back to the bazar to find their version of Drano after I have spent half the morning trying to unclog the kitchen sink with a tiny and handy plunger kept under the sink because I can’t bear to make another report about something else gone wrong.

I speak enough Spanish to hear the word cerveza from the man walking up and down the beach with an ice cream cart, and I buy three because the sun is kind in the late afternoon, the beach is full of shells, and Mythili, the only child who would step out of the apartment with me today, is having great conversations with me about how much weddings cost and what types of jellyfish exist in the world and how many shells she thinks she can collect by the end of the week.

I speak just enough Spanish to explain to Jose, Andrea’s friend and owner of the ironically-named CarGlass shop (Andrea tripped over this title many times when she was explaining the location of the shop), that I have an arrendamiento (thank you Google translate), not a rental, that they wanted to charge me 3000 euros for insurance, and can I just pay for it myself?

I speak enough Spanish, with a few stops and bouts of “más despacio”, to sign the paperwork Jose lays out for me, to shell out another 105 euros, to praise the good lord that, once the thief broke the window and saw only a selfie stick inside my Polo Ralph Lauren purse, he decided not to take anything at all. Not even the purse. (He probably realized it was just crap polyester like everything else on this godforsaken planet).

But I don’t have the words, in any language, to describe how challenging traveling with my three girls has been this year. They have reached the tipping point of childhood exuberance melted into adolescent angst, and nothing, it seems, is quite what they want to do.

I have no other adult in the house to help me light that llama, no one to plunge the sink, no one to commiserate with me at 4:00 a.m. when my oldest wakes me by talking to her boyfriend back home, no one to wash up Riona’s puke from eating mussels before the sun rises on a Sunday morning. No one to stand by my side and say, “We didn’t fly across the world for you to sit in an apartment all day and night.”

That little triangle of broken glass has brought fear and doubt to a trip that is already plagued by fear and doubt. While at the beach, I tell Mythili I am afraid to go in the water with her and leave our stuff, because what if someone steals it? “Don’t turn into that, Mama. No one ever steals anything from you, as you always say, case in point with the purse.”

But I speak enough Spanish to understand Jose, when he arrives at his shop at 8:52 on a Monday morning and I am already waiting, come right up to me and say, “Ud.  Es Karen, la amiga de Andrea?” Because yes. We are already friends.

I speak enough Spanish to read the bar-coded descriptions of historical points in Huelva as I pull them up on my phone, learning about Cristobal Colon, ship building, and industry while treating myself to pretty views of modern architecture, shady parks, and perfectly placed fountains. 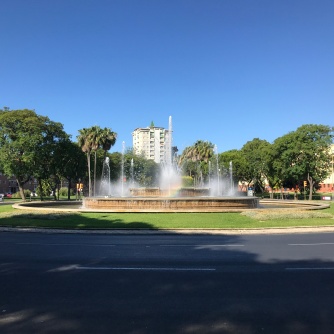 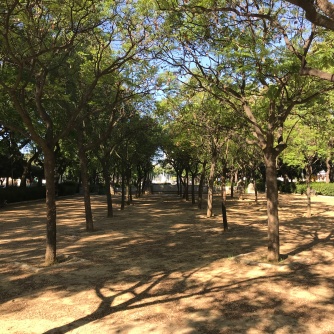 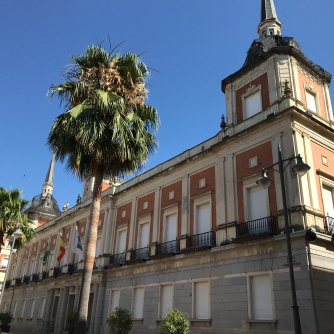 I speak enough Spanish to navigate another day here, to order goat cheese with honey AND jam, to laugh with Mythili at the botched menu translation of squid meatballs as “squid balls.”

The words I need to find, words that could never fit in my car, my Huelvan apartment, my Polo Ralph Lauren purse, are the words of a lonely traveler, a neglected mother, one who just wanted one last glorious summer with her girls before they got too big, only to realize and accept, nearly home by now, that they are already too big.

I still have my Polo Ralph Lauren purse. My selfie stick. My gum. Jose is fixing my CarGlass, so by 18:00, the girls and I can pile in the Peugeot and arrive at the beach well before sunset and late enough to “not have to swim or get sandy.”

I still have the Spanish words I will need to navigate the next two weeks.

I still have the three girls with me, moody or not, and I know in my heart that they will one day look back at this crazy Spanish adventure and be grateful for it.

And no matter what fears and doubts have traveled with me across the world, I still have these views, and they are worth more than the price of broken glass, a Polo Ralph Lauren purse, a scam of an arrendamiento. 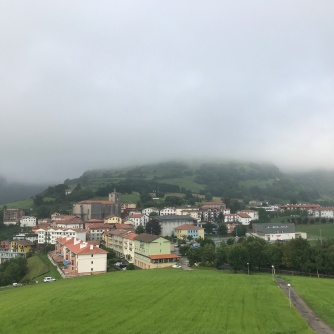 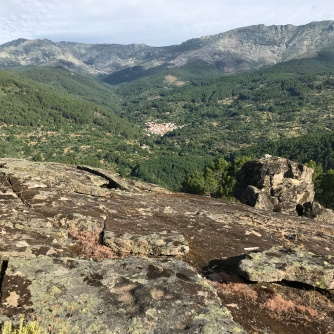 No thief or child could take them from me.